Posted at 14:46h in Blog by admin_edirect 0 Comments

Located on the eastern coast of the Arabian Peninsula, the present-day UAE  is an independent, sovereign, and federal state consisting of seven emirates. It was on the 2nd December 1971 that the United Arab Emirates (UAE) was declared as The seven emirates that it is composed of are Abu Dhabi, Dubai, Sharjah, Ras Al Khaimah, Ajman, Umm Al Quwain, and Fujairah.

In this article, we will take you through the history of the UAE to give you an idea of how it evolved from an ordinary middle-eastern country to be one of the richest destinations in the world and why the UAE National Day is the most loved day for people of the UAE.

The British had signed various agreements from 1820 to 1853 with different emirates. The condition of these agreements was that the sheikhs had to ensure peace at the sea and refrain from building large ships and erecting fortifications along the coast.

The treaty prohibited piracy in the Arabian Gulf banned some forms of slavery and required all usable ships to be registered with British forces by flying distinctive red and white flags which exist today as the flags of the respective emirates. This flag was supposed to be the symbol of peace with the British government and each other.

The land owned by these leaders who signed the treaty was referred to by the British as the ‘Trucial States’ or ‘Trucial Coast’ or ‘Trucial Sheikhdoms’. The Trucial states remained an informal British protectorate until 2 December 1971 when the UAE declared its Independence.

Ever since then, December 2 has been celebrated as the National Day in UAE. This day marks the unification of all seven Emirates into one nation. H.H Sheikh Zayed bin Sultan Al Nahyan became the first President of the independent UAE. 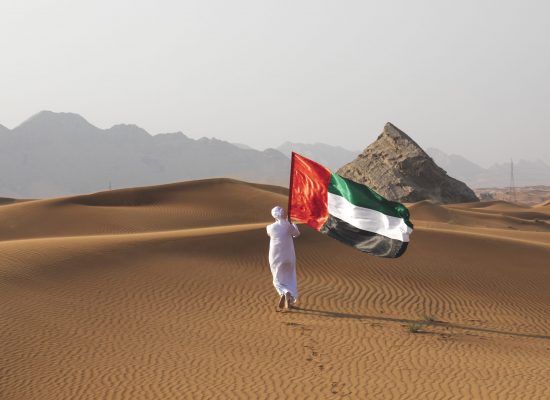 At present, about 30 percent of the UAE’s gross domestic product is directly based on oil and gas output. The country possesses the sixth largest proven oil reserves in the world. Oil well exploration began in the UAE in the early 90s.

The first survey of Abu Dhabi began in 1935 but was interrupted by World War 2. Once the war was over, gravity surveys resumed in 1946 and thirty years later, the first cargo of crude oil was exported from Abu Dhabi.

In 1966, Abu Dhabi became a member of the Organisation of the Petroleum Exporting Countries (OPEC) 1966. When the Emirates declared independence in 1971, membership was transferred to the UAE. Various researches were on that led to some prominent discoveries in the 1970s and 1980s.

As a result,  by 1992 the four oil-producing emirates had total crude oil reserves of 98 billion barrels and natural gas reserves of 5.2 trillion cubic meters, with the majority of both reserves lying within Abu Dhabi.

In 2010, oil production in the UAE was in the region of 2.3 MMbopd and it possessed the sixth largest proven oil reserves in the world. In recent years, the United Arab Emirates has shifted its focus to natural gas production. This comes in response to the increasing domestic consumption for power, desalination, and reinjection of gas into oil fields increases demand.

Ever since its independence, all the 7 emirates are constantly evolving. Major changes were taken within each emirate after the independence. Each of them was following their own different route to financial independence and economic development.

While the UAE has the most expanded economy in the GCC, the nation is continually on a move towards an information and innovation-driven economy, depending more on human resources and innovation than hydrocarbons.

The UAE authorities have laid out clear objectives for empowering diversified and information-based development to accomplish a cutthroat knowledge-driven economy and are carrying out an expansive scope of strategies to accomplish their objectives. Such changes will expand usefulness, development, and lift the supply of profoundly qualified work.

Foreign residents in the UAE constitute somewhere around 80% of the populace. The public authority has introduced a number of changes to residency, secular-leaning, and legal changes to draw in worldwide abilities that help an information-based economy.

The Peak of Development: 1990s

During the 1990s, UAE began getting the limelight from all around the world owing to a series of developments that took place. This series of new projects were initiated by Sheikh Mohammed, the third son of Sheikh Rashid. He is deemed to be the driving force behind the emirate’s development from the mid-1980s onwards.

Among all the other projects, the two most prominent ones are the  Burj Al Arab hotel and Emirates airline that are said to have contributed to the economic upliftment of the UAE more than any other development that has taken place to date.

Further in the series were projects such as the world-famous Palm Jumeirah (the world’s largest artificial island), Burj Khalifa (the world’s tallest building), and the vast Dubailand (world’s largest theme park and leisure attraction). Due to the great recession of 2008, the work on Dubailand remained suspended for a long period of time and finally resumed in 2013.

The main objective behind these multi-million projects was to turn all the gazes towards UAE for tourism, transport and business. The aim was to make it a leading global centre for business to dominate the region’s economy.

The year 2008 was a major bump on the road to success for the UAE. The great recession that affected almost the entire globe, incapacitated the ever-evolving state of UAE greatly. The Global Credit Crunch resulted in the collapse of the real estate market of UAE. The state which was in the limelight for launching record-breaking development projects was pushed to the edge of bankruptcy. It restored some relief through the bail-out package but a vast majority of the big projects had to be ceased completely.

Taking support of its oil reserves, yet again, it bounced back to glory. The biggest voucher of its bounce back is the headline event- Dubai Expo 2021- a project worth USD 7 billion on a desert site that is described by the reporters as equivalent to the size of 600 football fields.

The ceremony was attended by Abu Dhabi’s powerful Crown Prince Sheikh Mohammed bin Zayed Al Nahyan, Dubai ruler Sheikh Mohammed bin Rashid Al Maktoum and a host of other dignitaries. It will go on until March 2022 and is likely to see participants from over 190 countries. The city has decided on a target of 25 million visits.

The present-day UAE is famous for another prominent thing- The Emirati culture of hospitality. They are extremely warm and welcoming people. This culture has its root in the ancient Arabian custom of welcoming desert travellers with warmth, kindness, and generosity.

Their generosity and welcoming nature are also the result of diversity in the culture. At present, the UAE is home to 200 different nationalities and cultures. Through a series of development projects, the country has always ensured that there is enough space for everyone to grow and evolve.

This rare warmth of the Emiratis is among the top reasons that the UAE has emerged to be one of the most popular tourist destinations in the world surpassing New York City, Istanbul, Kuala Lumpur, and Rome. In 2019 alone, it hosted close to 16.3, million tourists.

What Does the Future Hold?

These numbers are only going to rise in the coming years as UAE is all set to race on the road to success. For its 50th National Day, the UAE’s leadership has unveiled Principles of the 50- a list of 10 principles for the country to follow during the next five decades. As per a report of the Official Portal of the UAE Government, it aims to be the world’s best country in the Global Food Security Index by 2051 and among the top 10 countries by 2021 and we see no reason why it is not happening