25 Nov evolution of marketing: when did digital marketing begin?

Posted at 10:38h in Blog by admin_edirect 0 Comments

evolution of marketing: when did digital marketing begin?

To simply put, digital marketing is an umbrella term used for all kinds of promotional activities that are achieved using electronic devices and the internet. It can refer to marketing communications done over mobile phones, computers, tablets, etc.

As the name suggests, content marketing refers to the technique of promoting your brand with the help of informative content. It aims to target the customers organically by providing some valuable content.  As the content adds value, potential customers are likely to buy the product or service. 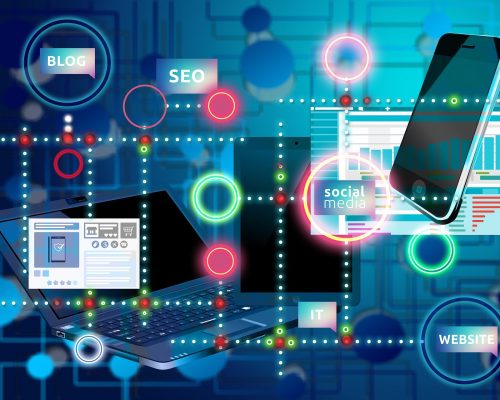 Pay per click advertising is becoming increasingly popular as it is deemed cost-effective. It is one of the recent kinds of advertising where you place ads on largely visited websites, and pay only when someone clicks on your ad.  It gives you the option of paying only when the potential customer has initiated a buying action.

As the name suggests, affiliate marketing is a promotional activity where a person or organization gets paid for promoting the other’s product or service on their webpage. It is based on a revenue-sharing model where the affiliate gets a small commission whenever a purchase is made through the link on his webpage. The Covid-19 had a positive impact on affiliate marketing due to the rise in the e-commerce industry and services.

In email marketing, the business sends cold emails to a carefully curated list of potential customers informing them about the products, services, new editions, discounts, etc. It requires you to do thorough research and personalize each message to make it an offer that they can’t refuse. The assistance of professionals with a good hold on in-market research can help you yield better results. Anything less than that would most likely end up in the trash.

There is still some debate on when did digital marketing begin to function. Some argue that Guglielmo Marconi who invented the radio in 1896, was the world’s first digital marketer. Others, however, are of the opinion that computer engineer Ray Tomlinson should be credited with the birth of digital marketing because he sent the first-ever email in 1971.

After that, in the year 1993, the first-ever clickable web-ad banner went live and that is when we believe that the trend of digital marketing set in. After noting the success of the web-ad banner, hotwired invested in a few banners for their promotion.

The web 1.0 platform became more functional with the launch of the first-ever mass-market browser, Netscape that was launched in 1994. The number of people using the web increased 4 times in just two years.

1994 is considered to be an eventful year for digital marketing. It was in 1994 only that Yahoo- a search engine was launched. Also, the first-ever e-commerce transaction was done over the internet in the same year.  Yahoo became a success overnight and hit almost 1 million users in a single year. It was also the year when the biggest e-commerce website, Amazon started as a book-selling website.

In the year 1995, eBay- another popular e-commerce website came into being. It was originally started as an auction website by its founder Pierre Omidyar for selling his second-hand laser printer. The printer was listed for $1 but the bidding went up to $14.83.

Seeing the success of the bid, Omidyar thought of doing something big and this led to the birth of eBay. In the following year i.e 1996, more search engines and tools like HotBot, LookSmart, and Alexa were introduced.

In 1997, Sixdegrees.com, the first social media site was launched by Andrew Weinreich. Despite very few features this new experience was very well received by the people. 1997 was also the year when pop-up ads started appearing on web pages.

Finally, in the year 1998 google was launched that completely changed the dynamics of internet browsing. This year is rightly regarded as the golden year for digital marketing as besides the launch of Google, MSN and Yahoo web were also introduced to the public.

1999 was the year when Goto.com monetized the listing on search engines by charging fees from websites to list them on the search result page. Whoever paid the most was listed on the top and so on. It led to the trend of paid ads and can also be linked to the present-day Pay Per Click advertising.

However, this practice was criticized for adversely affecting user experience. That is when Google came up with a better and more ethical alternative- Google Adword in the year 2000. Google replaced bidding with a quality score model to ensure smooth and ethical browsing.

2001 was the year when the market was swept clean of small competitors through the dot com bubble burst. In the year 2002, the first ad-blocker was invented and LinkedIn was launched in the market.

In 2003, MySpace and WordPress were launched followed by Gmail and Facebook in 2004. It was the same year Blackberry launched the first true modern smartphone. In 2004, for the first time, Google went public and Facebook launched its first advertisement called the Facebook flyers.

In the subsequent year, broadband services were launched to facilitate quick speed while browsing the internet. It was the same year when the most popular video platform-youtube made its debut.

2006 again is a very prominent year for digital marketing as it witnessed the biggest one-month growth in search engine traffic up to 6.4 billion. Amazon e-commerce sales crossed $10 billion, Microsoft launched an MS live search, and Twitter was also released with the new feature of 140-word posts.

The digital ad started surging and hence the focus was now on being hyper-targeted. Facebook started with small display ads and sponsored links and progressed onto hyper-targeted ads based on users’ demographics and interests.

2007 marks the beginning of the smartphone revolution. It was the year when iPhone was launched by the tech giant Apple and has been on the hype since then. Tumblr was launched and web streaming service Hulu was also founded in the same year.

As the complexities of SEO and other digital marketing tools were increasing, there was a need for expertise. That is when the marketing agencies came into the picture and the term ‘Digital Agency’ was coined.

In the next year, 2008 Spotify was launched followed by the launch of ‘Instant’ by google for real-time search engine results in 2009. It was also the year when influencer marketing started evolving as a popular form of promotion.

Finally, Whatsapp was launched in 2010 which grew to be the most popular global messaging app. According to a recent report by Statista 2 billion users were accessing the WhatsApp messenger monthly as of October 2021.

It was the beginning of 2011 when the television viewership started falling considerably as more and more people shifted to digital mediums such as mobile phones, PCs, Tablets, and Ipads. Google+ and Google Panda were launched this year. Snapchat was also introduced.

In the year 2012, the Internet of Things came into being and highly influenced the marketing trends. The next year Instagram introduced the new promoted post option that allowed people to run ads while sharing previous posts. Virtual assistant tools such as Alexa were introduced.

This period is deemed as the modern era of digital marketing. As more and more companies joined the digital marketing world, innovative technologies and branding tools were invented. Digital Marketing became more complex and sophisticated to give a deserving space to all enterprises.

The market was flooding with cheap smartphone options which led to mobile ad traffic surpassing Web traffic. This big shift necessitated the marketers to focus on in-app mobile advertising.

In 2017, two very important developments took place with IAB tech introducing the Ad.text and Apple launching the AR kit followed by AR core launch by google. The mad surge of digital ads made it imperative for brands to personalise the ads through an in-depth understanding of consumer behaviour.

The Future of Digital Marketing

It is easy to predict that the future of digital marketing would be pivoted on creating more personalised and less aggressive advertisements that would organically direct the consumer to your product.

As the people are bombarded with information every day, to grab their attention brands will have to come up with creative ideas to engage with them and also will have to be very transparent about the quality of their service.

Owing to the constant up-gradation and complexities,  there is no one tool or technique that you can rely upon for successful digital marketing. A mix-match of different tools is the only way you can cast a big net for the customer. This definitely requires professional expertise. Consider the best Digital marketing services in Dubai.

edirect has a team of professionals that have been in the industry for a decade and can help you take your marketing game to new heights. Connect with us today at +971 50 957 5877 or write to us at info@edirect.ae